The University of Gloucestershire's Media team has now uploaded the keynote videos to YouTube, and the links given in Emily's previous post will soon cease to work.

1. Dr Monica Vilhauer (Roanoke College, USA): "The Game of Understanding: Dialogue-Play and Opening to the Other"

2. Prof. John Wall (Rutgers University, USA): "The Ontology of Play: What is Human Being from the Point of View of Childhood?"

4. Prof. Randolph Feezell (Creighton College, USA): "Approaches to Play and Its Significance for Sport and Life"


We hope you find these an enduring and valuable resource, as well as a memory of this unique event!
Posted by Unknown at 22:11 No comments:

Keynote videos from Philosophy at Play

Reflections on the Conference 2 - Chris Martin

Apologies for the delay in keeping this blog topped up. The second half of April was pretty weird here in the UK, with the Easter holiday weekend followed by the royal wedding/May Day holiday weekend, all bathed in unheard-of-for-April sunshine and warmth.

Chris Martin from Skills Active posted a response to the conference on his blog. Thanks Chris! His response can be found here: http://www.skillsactive.com/blogs/2827_reflecting_on_philosophy_at_play.

Reflections on the Conference 1 - Marc Armitage

So ... attended the two-day Philosophy at Play conference at the University of Gloucester earlier this week ... and it was a good one.

It was two very packed days full of philosophical enquiry, playfulness and wonder with some very challenging presentations and papers being delivered to an international, multi-disciplinary audience.

My head is spinning with ideas and thoughts. Highlights for me include:

The key-note speech by Prof. John Wall of Rutgers University, Camden NJ (USA) talking of ‘The ontology of play: what is human being from the point of view of childhood’. Particularly useful was an historical summary of philosophical thinking on play structured around three ’traditional’ approaches – the Top Down approach, the Bottom Up approach and the Developmental approach; and the conclusion that people do not ‘play’ – rather, that play is something that exists outside of people which they are drawn into.

This was a theme continued by Francis Barton in his paper, ‘A twist on Heidegger: the ambiguous ontology of playspace’ which discussed the idea of play still being play without a player, and how interaction with objects and spaces ‘in the background’ make play ‘real’.

Andrew Edgar’s paper, ‘Playing with air and water: the landscape paintings of Peter Lanyon’ was an interesting visual distraction, discussing the playfulness in the paintings inspired by Lanyon’s interest in gliding by and the problem of representing movement in paint.

And Pat Gordon-Smith’s paper, ‘Young children’s morality through play in their earlier years setting’ which presented fascinating results from her research project highlighting the complaints of staff over children’s apparent inability to take turns and share while at the same time routinely missing such things taking place. This led to practitioners effectively ‘enforcing turn taking’ which was not necessarily a positive.

And above all the multi-disciplinary nature of the event, meeting new people and networking has been a definite highlight. And maybe one other thing too!

PDF of abstracts for the conference

We've put together a nice compilation of all the abstracts for the conference.
They're here: http://dl.dropbox.com/u/2157704/listofabstracts.pdf
I think it would be interesting to have any responses to these, in general. Not in response to specific abstracts, at least until speakers have had a chance to actually deliver their paper!
But, what's missing? What topics could we have had more papers about? What do we make of the concentrations of ideas that are present?
Another question: there are various understandings of 'play' expressed within these abstracts. From the very concrete - e.g. the activity of children or actors or sports participants - to the more, er, abstract. Are we all talking about the same thing, or is there a confusion of ideas here caused by using the same four letter word to refer to quite different things?
Posted by Unknown at 17:50 1 comment:

I thought it was about time we had some more action on here!
Some very half-baked thoughts; what do others think?
If play is a way of disturbing the rational order of reality (as Stuart cites Deleuze and Guattari, a way of 'plotting lines of flight away from planes of organisation'), and could even be said to be an irrational, or nonsensical form of behaviour, then isn't it wholly incompatible with the project of philosophy, which is all about the imposition of order and the application of rationality?
If we allow philosophy to become an engagement with irrationality (as opposed to a battle against it), then we betray the nature and goals of philosophy.
And if we allow the play instinct to become defined and subsumed by rationalisation (what could be seen as a co-option of play to powers of order and control) then the very essence of play is lost.
How can this be resolved?
Posted by Unknown at 17:11 1 comment:

One of our keynote speakers, Randolf Feezell has just published an article in the Journal of the Philosophy of Sport on the concept of play:

A Pluralist Conception of Play 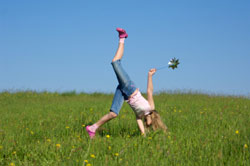 Welcome to the Philosophy at Play blog here at the University of Gloucestershire.

This blog is to facilitate philosophical investigation into, and reflection on, play. It is also link to an upcoming (click the tab above for details) event at the University.

As the days go by, more links, as well as substantive posts, will begin to appear here - and comments and suggestions are - of course - very welcome.